As the default music players don’t render all the excellent features, it may not deliver a proper listening experience to the users. The Google Play Music is a default music player for the Android devices. It offers a simple user interface that deficits feature such as the folder view in the library. If you are a huge music adorer, you can check out the list of the topmost best Android music player 2018 compiled in this post. Have a look! 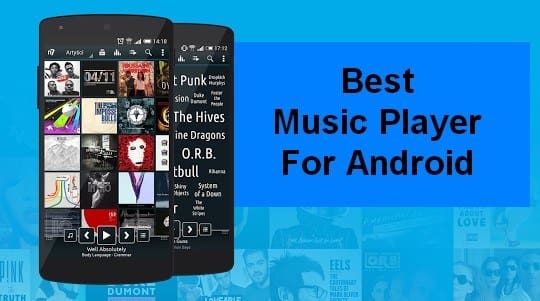 The music player is the best program that reads the music file and plays it on an Android device. Most of the Android users make use of a default music player to play their desired music.  Here is a great compilation of the topmost music players for your Android device that is available absolutely for free of cost:

Poweramp is the best music player available for all the Android users. It offers an impressive user interface with abundant beneficial features. The band equalizer helps the users to handle the music balances. There is a feasibility to add the lyrics to the song screen. This music player supports different audio formats. Some of the formats include MP3, MP4, WMA, WAV, WV, AIFF and more. The users can set a theme for this music player based on their preference.

BlackPlayer is the best music player that offers a simple user interface. There is a feasibility to customize the tabs based on their choice. This music player offers various features such as widgets, equalizer, themes, ID3 tag editor and more. As it offers a customizable user interface, you can control the music player through your swipes and gestures. One can change the font and the user interface color using the custom values. Apart from the free version available on the Google Play Store, you can also use the paid version with a plethora of features.

Google Play Music is an excellent and the most popular music player offered by Google for an Android device. On this music player, you can easily search your favorite song with much ease. The major feature of this music player is that the playlist and the songs are synchronized using the account. This allows the users to access music from different devices. You can store more than 50000 songs from your favorite music collection. This music player can be worked on Android, iOS, and the web.

n7player Music Player offers an intuitive user interface with a search feature. This Download music player helps the users to zoom in and out and view the music file that you wish. There are several graphical enhancements to the media library with which you can search for any song.

This music player offers an advanced 10-band equalizer that helps you to customize the music based on your preference. Some of the best features include bass boost, tag editor, sleep timer, gapless playback, sound virtualization effects, widgets and more. It provides a free trial version for about 14 days. You can even purchase the complete version of the music player from the Google Play Store.

The JetAudio HD is a popular Android music player that offers an extensive range of audio enhancements alongside the plugins. Besides this, the users can make use of the equalizer, simple effects such as the tag editor, widgets, bass boost, MIDI playback and more. There are both free and paid versions for the JetAudio Android music player that are quite similar. The paid version of this music player is free from the advertisements and there is a feasibility to add themes.

Neutron Player is a prevalent music player which is quite popular among the music lovers. One of the best features of this player is that it provides a 32/64 bit audio rendering engine. It offers an enhanced sound quality to all its users. Some other features include a built-in equalizer, a set of audiophile specific features and more. It is the best option for those who are ready to spend more on purchasing the premium version of Neutron Player. The free version is available to download right from the Google Play Store.

Last but not the least, the Musixmatch is another best music player that helps the users to sing songs. There is a floating lyrics widget present on this player that allows the users to access the lyrics synchronized in the real time. At the time of using the apps like YouTube, Spotify, Apple Music, Sound Cloud and more, you can view the lyrics to various songs. It also lets the users search their favorite songs with the help of the artist name, title and more.

That’s it! Here ends the list of the 8 best music players for Android for free of cost. Hope this guide has helped you to pick the perfect player for your Android device. For more doubts and queries, just ask us through the comments section.