Many Smartphones are coming in the market with advanced features. Of all these there is lofty craze for Smartphones with Android OS. In these days everyone wants to experience the advanced features released in the market. But the main obstacle comes in front of them is the price of the mobile. Are you the one who want to buy a mobile with most advanced and high features at minimum price but in a confusion of selecting which mobile is the best one out of various phones in the market? You don’t worry; this post provides the list of top 5 android mobiles under 10000 and their features. After looking at the list, you will come out of confusion and decide the phone to be bought. 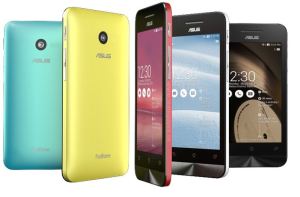 This can be said as the perfect choice of Smartphone with Dual SIM option in 10000. The OS used is Android, v4.4 (KitKat).  Intel Atom Z2520 Dual-core processor is used with 1.2GHz processor speed. The performance is also good with 1GB RAM and 8GB internal memory expandable up to 64 GB. It has 8MP Main Camera, which gives high definition clarity to the images and a 0.3MP Secondary Camera. It also has LED flash, which allows you to capture best pictures in the night. Coming to the display, it has 4.5inches TFT touch screen. IT is one of the very less numbers of phones that provide Corning Gorilla Glass 3 which give high protection to your screen.  This is the best option with high features just in Rs. 6,999.

It is most good looking phone with curved back part which provides high comfort to hold the phone. The processor used in it is Qualcomm Snapdragon 200 with 1.2GHz speed and it is dual-core with android OS, v4.4.2 (KitKat). It has a 5 MP camera and 4 GB internal memory expandable up to 32 GB. It has a non removable Li-Ion 1980 mAh battery. Coming to the screen, it also has Corning Gorilla Glass 3 with a 4.3 inches capacitive touch screen. It costs Rs. 6,999.

Micromax introduces a Smartphone with quad-core processor with speed 1.3GHz. The prominent feature in it is its display screen of 4.7 inches. It has 5 MP back Camera with LED flash and 2MP Secondary camera which is better to make video calls. It has 2000 mAh battery.  1GB RAM gives high performance and has an internal memory of 4 GB which is expandable up to 32 GB. It also costs the same as above two mobiles, i.e., Rs. 6,999.

It is the only phone that gives the outlook as iphone with quad-core processor. As per camera this is the best option out of 5 best android smartphones below 10000 INR. It has 8MP Main Camera with LED flash and 2 MP front Camera. Its screen size is 4.5 inch with an internal memory of 8Gb expandable up to 32 GB. Its price is S. 7,999.

The other phone from micromax is here in the top 5. It has a 5 inch big screen which is bigger than others. It has good camera clarity of 8 MP back camera with LED flash and 2 MP front camera.  It has 8 GB internal memory expandable up to 32GB with 2000 mAh Li-Ion battery.

Finally, I want to conclude that you can select Lava Iris X1 or Micromax Canvas 2 colors A120 for good camera. As per display protection you could select Asus Zenfone A450 4 or Motorola Moto E. If you want good battery capacity you could select any of the two Micromax products provided in the top 5 Android mobiles under 10000.

Smartphone are essential gadgets these days. From study to business works, and entertainment as a side role – everywhere you need a smartphone. The progressive world needs its citizens to be connected to a network always; and only a smartphone can provide you the best solution for that. The dual core or more core processors, 1 or more GB of RAM, definitely a tempting configuration. But not everyone can afford to buy such smartphones, as they cost very high. But why would that stop you from buying a smartphone and experience the faster world? You can get smartphones with 1GHz single core processor and 1GB RAM and test the taste with whatever you have got in your wallet. You will even get branded phones and, not some Chinese craps so why would you wait for?

So here we listed 5 smartphones that are just capable of doing almost everything very fluently with a 1 GB RAM.

An awesome budget smartphone from the manufacturer HTC; and it comes with a 1GB RAM on board. This phone implies the Sony curve throughout its whole body and you also get the phone at a great deal of only 100$; well that’s in contract. Contract free would be higher but still you will get this phone in lesser than other smartphones. The phone comes with Android Gingerbread you can upgrade it to Ice Cream Sandwich. It’s one of the best looking and decent phones out there.

Big screen, curvy design, and the transparent panel at the bottom – awesome, isn’t it? It is, everyone would agree to that we assume. This is another phone that comes at only $100, well that definitely with contract. You won’t get an off-contract Xperia for 100$. This phone has 1GB of RAM and other spectacular specifications. The phone comes with Android Gingerbread or ICS and you can update it to Jelly Bean.

Regardless to say, Samsung Galaxy S2 is still one best Android smartphone in the market. It has the potentials to beat many other smartphones out there and as the price has reduced a lot now, you might be able to afford one off-contract now. S2 comes in 1.2GHz processor and 1GB RAM, and you can grab one on-contract for $99.

This name is quiet unknown in the smartphone market. But to be honest, this is not actually a stranger. If you want a phone for movie streamings and internet surfing, then this might be the device you are actually looking for. It has 3G support and it definitely comes with an 1 GB RAM; and the build quality and body is unique. The 4.5 inch screen might be a LG-like product but it still is good and a good deal for 99$ on-contract.

Everything you get at a comparatively lower price tag. It comes with a 1GB RAM, 1.2 GHz processor, and a 4.5 inch display with a resolution of 3264×2448 pixels; the operating system it runs on is Android 4.1 Jelly Bean. All these comes at a price of 215$ off-contract.