Tweet
Share
Pin1
Share
1 Shares
Samsung Galaxy Note 9 will make its debut on August 9. A couple of leaks and rumours about the upcoming phablet have already been covered online. Now, a fresh leak about the Galaxy Note 9 has surfaced. This time, the specs sheet of the device has been spotted, revealing major specifications of the Samsung phone. 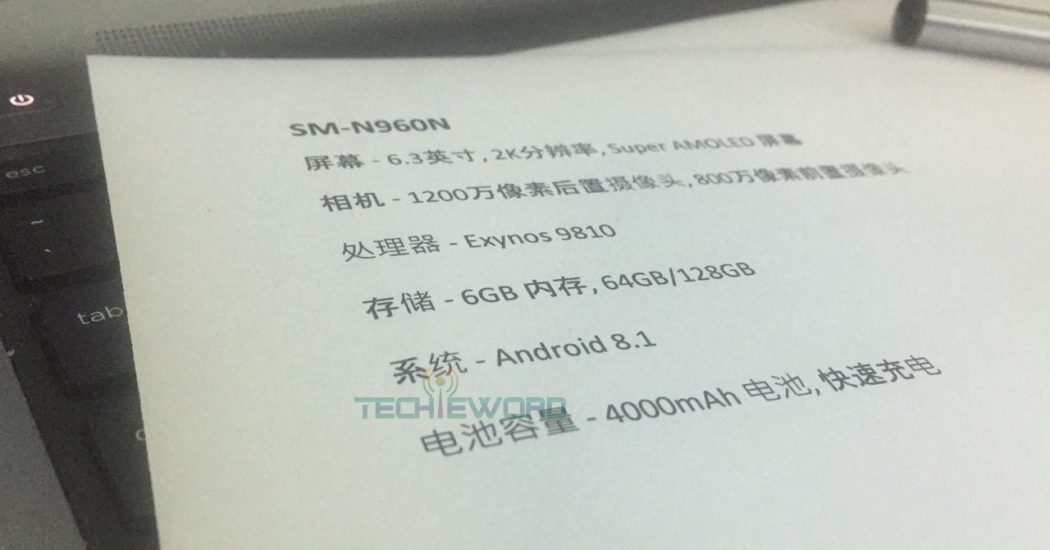 The leaked sheet reveals one of the model numbers of the Galaxy Note 9. Listed as SM-N960N, the device will carry a 6.3-inch Super AMOLED display with 18.5:9 ratio. The screen resolution would be 1440 x 2960 pixels. The device will run on Android 8.1 Oreo. Inside, the phone will be fitted with an Exynos 9810. Another variant of the Note 9 would be launched as well, fitted with Snapdragon 845 chipset. The device will house a 6GB RAM coupled with two different storage variants – 64GB and 128GB.
The device will have a dual rear camera set up on the back, measuring 12-megapixel. On the front, there will be an 8-megapixel selfie shooter. No precise features about the camera have been disclosed yet. A 4000 mAh massive battery would be fitted under the hood.
Rumoured to be marketed for around $1000, Samsung Galaxy Note 9 is expected to be up for sale by the end of August 2018.