Lately, Samsung has been in News for its upcoming flagship smartphone, Galaxy S10 (and S10 Plus) which are expected to be unveiled in the first quarter of 2019. Samsung’s upcoming flagship device is speculated to come up with some new improvements. Recently, a report had popped up claiming that the upcoming Galaxy flagship smartphone will flaunt a triple camera setup. However, the company has already released a quad-camera setup in Galaxy A9 (2018).

Now, another leak about the Samsung Galaxy S10 has been spotted on the Chinese social networking portal, weibo revealing some of the specifications of the upcoming smartphone. As far as leaked specs sheet is concerned, the Samsung SM-G9700 will bear the same display size of 5.8-inch with a resolution of 1440×2960 pixels. Inside, the phone will be powered by the Qualcomm’s to-be-released chipset, Snapdragon 8150. RAM would be 6GB, while the internal storage space would be 128GB. The phone will come with an expandable storage slot. 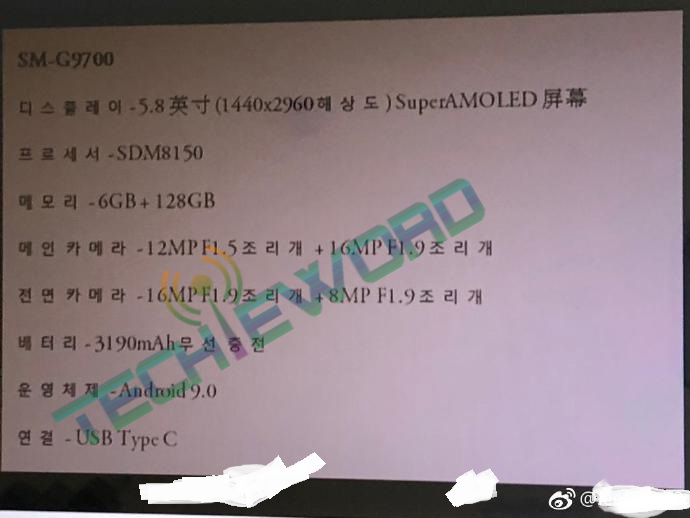 The Galaxy S10 will have a dual rear camera setup, measuring 12-megapixel and 16-megapixel, reveals the leaked specs sheet.

On the front, the phone will sport a dual camera setup as well. This time, the company would fit two camera for taking great selfies – 16-megapixel and 8-megapixel.

The Samsung Galaxy S10 will run on Android v9.0 (Pie). Under the hood, the device will pack a 3190 mAh battery, which will support wireless charging.