Anyone who has ever taken the time to visit Las Vegas or see a Cirque du Soleil show has been left in awe of the performance. Well-trained dancers and acrobats delight the senses with breathtaking feats, which leave patrons waiting on the edge of their seats begging for more, and hoping the acrobats do not fall. The show is appealing because of its ability to keep audiences engaged through visual effects and sounds, as well as, of course, the extraordinary feats of human strength, skill, braveness, flexibility and athleticism.. 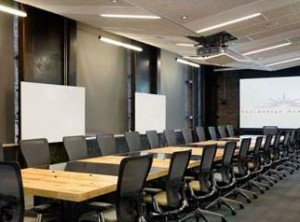 This is possible because like the acrobats on stage there is another group of acrobats, specialiaing in sound and lighting hiding behind the stage. Their job is to control all of the projection systems and lighting, which produce the visual effects. Steve, projection systems expert at Videonations says that “many of the systems are very similar, if not the same technology, as the ones used in office buildings and schools to show presentations on the walls.”

Likewise anyone who has ever been to a professional sports game knows the “pre game” shows like the ones put on by the NHL in Canada and the United States involve a great deal of projection equipment. The sort of projection equipment used is what allowed Canada to break the virtual ice at the 2010 winter Olympics.

Despite the consumer facing application of projection equipment there are many possibilities to use this technology in order to boost corporate branding. It can be as simple as the installation of a modern theatre with a high technology based projection system. This will allow sales people from across the company to showcase products, services, and competencies to a variety of potential customers.

They also have a host of applications internally. Such projection systems can be used to put on interactive training sessions, and help gain buy in from important internal stakeholders.

One of the major debates going on in IT departments around the world surrounds equipping conference and meeting rooms with either Projectors or LCD displays. The reality is there is a case to be made for one or the other, and even depending on the room for the use of both.

In the case of larger or odd shaped rooms with polls and pillars both a projector, for the main screen, and displays for those in the blind spots, makes a great deal of sense. After all the purpose of having displays and projectors in a room is so that those in the space can see and interact with the content in front of them.

One of the major factors when choosing projector or an LCD display is the lighting in the room. If the room is going to have a brighter ambient light or a lot of windows, a projector will be better able to produce a clear sharp image for those in the room. Likewise it is also a more suitable choice for a large room.

Smaller more intimate spaces work well with LCDs and BYOD or bring your own device setups. Both of these in the case of a smaller space allow for excellent collaboration.

As the technology has evolved it has grown better able to produce quick and sharp images. Over time the ability to carry out increasingly complex images and motions, has made projectors a mainstay of the entertainment, office and education worlds.