ITIL was introduced to the world in the early 1980s, which consisted of a series of books published over a decade. Its second version, ‘ITIL 2’ was released between 2001 and 2001, ITIL 2 dealt with 10 core processes and the service desk.

The third version was launched in the year 2007 and was simply called ITIL 2007 instead of ITL 3. Here the service lifecycle was broken into five stages: service strategy, service design, service transition, service operation, and continual service improvement. And instead of 10 processes, the new version came up with over two dozen.

This brings us to the most recent version before the upgrade ‘ITIL V3’, which was released in the year 2011. Apart from its simplicity, readability and Business Relationship Management (BRM) process, the version did not offer a lot more. ITIL V3’s five books are ITIL Service Design, ITIL Service Strategy, ITIL Service Operation, ITIL Continual, and ITIL Service Transition Service Improvement.

The new and updated ITIL® version is called ITIL® V4. The ITIL® V4 Foundation was released on 28th February-2019 and the publications associated with ITIL Strategist, ITIL Specialist, and ITIL Leader will be released along with respective modules in the second half of 2019.

ITIL 4 expands the previous version of ITIL V3 (‘ITIL 2011’) and provides a flexible base to support the organizations on their journey into a new world of digital transformation.

It can be described as an operating model for the delivery of tech-enabled products and services. The language has been revised and has been made even easier to read, this has been further improved with many practical examples.

ITIL 4 has been designed largely to keep up with the recent trends in software development and IT operations.

What is the Purpose of ITIL 4? And Why New Version?

Today in the fast-moving world the businesses and organizations want to align their needs with Information Technology services. The new version helps businesses to organize efficient risk management, enhance customer relations, forward better cost-effective practices, and make a dynamic IT environment that can freely develop and grow.

Businesses can navigate the Fourth Industrial Revolution also known as the new technological era with the help of ITIL 4 training. On a global scale, the current breakthroughs are distracting almost every industry with its speed issues. The new technological era has been marked by emerging technology in the fields including robotics, artificial intelligence, nanotechnology, quantum computing, biotechnology, the Internet of Things (IoT), 3D printing, autonomous vehicles and much more.

By aiding the human, digital and physical resources ITIL4 is going to provide a flexible and practical base to support the organizations and their journey of entering into a new world and to compete within the modern complex landscape.

With the release of ITIL 4 the context of ITIL has also increased, it not only emphasizes on how the business and technology world will work today but also that how is it going to work in the future with Agile, DevOps and digital transformation.

Starting from the basics ITIL 4 will focus on collaboration, transparency, automating and working holistically wherever possible.  It is going to be of much more importance to the software developers, service management practitioners, and businesses as it will promote an overall view of delivering products and services.

ITIL 4 still retains its core elements which make ITIL  priceless to individuals and organizations today. In every industry change is a constant and today organizations vouch to navigate this change which they can achieve through ITIL 4. Which is one of the best practices that supports organizations in navigating the ongoing change.

ITIL 4 is the new generation that combines all the best things from its previous version. Moving ahead from the traditional process-led delivery, the new version supports faster quality and value-driven delivery for the business world.

What makes ITIL 4 a better and improved version?

ITIL 4 is more customized and flexible. It offers a holistic view of the IT and encourages collaboration and fewer siloes, facilitates communication, integrates Agile and DevOps into ITSM strategies.

ITIL 4 concentrates more on concepts of outcomes, costs, risks, and value. Developing on a good selection of ideas championed by ITIL Practitioner, some of the important features of the new version are as follows:

Overall ITIL 4 is a refinement of ITIL V3, reflecting changes in the corporate culture where teamwork and intercommunication are given additional prominence. It integrates IT into the overall business structure.

What are the New Certification Levels of ITIL 4? 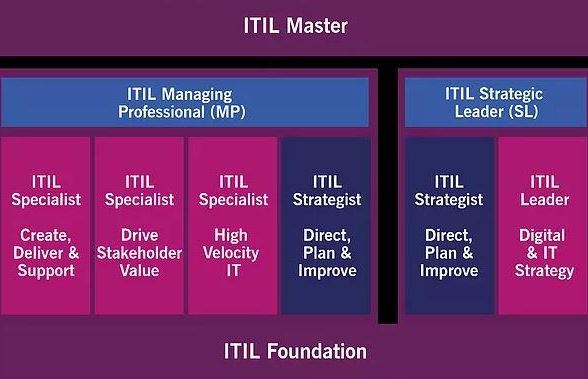 Its first certification release is at the Foundation level. This will be the prerequisite for any of the subsequent higher-level certifications.

The remaining levels are:

The modules for ITIL 4 will be released according to the below-mentioned timelines. ITIL 4 Foundation level has now launched, with the following higher levels due for release throughout 2019 and into 2020. More information regarding release dates is below: