Tweet
Share
Pin
Share
0 Shares
Rumoured to be unveiled as Samsung’s Android Go smartphone, SM-J260 has been spotted again on another certification portal recently. Now, the smartphone has gained certification from the National Radio Research Agency (NRRA). Previous reports have claimed it (phone) to be launched as Samsung Galaxy J2 Core. Another variant of the device has already been listed on the benchmarking site, GeekBench. 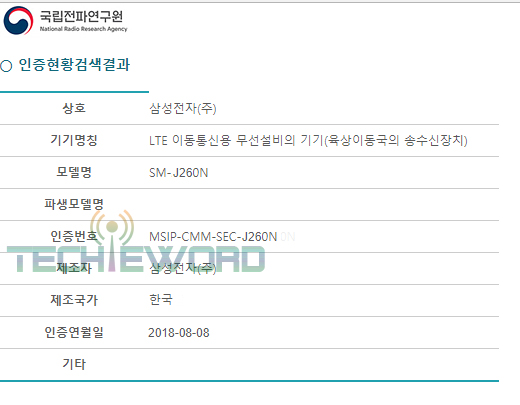 The GeekBench listing has revealed some of the specs of the upcoming smartphone. The SM-J260G will be launched with 1GB of RAM, coupled with a Quad core processor clocking at 1.4GHz. The device will run on Android 8.1 Oreo.
No exact information about its official launch is known yet. However, with frequent listings and certifications hint that the Samsung Galaxy J2 Core might hit the retail shelf soon.