Today we’re going to talk in-depth about Power Distribution Units (PDU), and the types of PDUs that you can purchase in a Tulsa data center. There are three main types. There’s basic, metered, and switched. And they increase in price in that order. Basic is the most cost effective and switched is the most expensive. 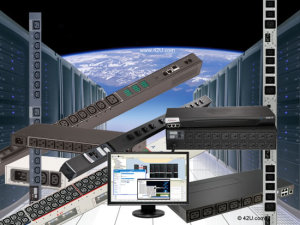 Let’s talk about basic. Typically, it has standard outlets, it’s rack mounted, and it has no additional functionality. So it’s essentially the same thing as a power strip that sits underneath your desk.

The next type is metered. And Metered does just exactly that. It meters the power and it typically has a digital display on the PDU. And you can plug an Ethernet cable into that PDU and see the amperage that’s being utilized in a live fashion. You can see what’s happening, but you can’t really change anything. The one other benefit of a metered PDU is it allows remote configuration. So, PDUs are becoming so advanced that they have software in them that you can remotely configure for the new software platform.

The final is switched. The switched is the most expensive, but it has the maximum functionality. It does everything the metered PDU does; but, in addition, it allows you to turn off outlets individually. So for example, let’s say you couldn’t get a server to respond. You’ve have already logged in but nothing is responding. And you want to do a hard reboot, but you don’t want to go down to the datacenter or you don’t want to call your employees to help you. So you decide that you will just perform a hard reboot from the power outlet.

Well, a switched PDU allows you to do that. It allows you to power cycle that piece of equipment outlet by outlet. So you don’t have to turn them all off and turn them all on. This gives you a ton of functionality and a ton of flexibility remotely. The final thing is threshold alarms. Switched PDUs will allow you to set an alarm. So if you reach a certain amp draw threshold, you start getting email alerts. Traditionally, on PDUs, you only want to use 80% of the max available and that’s the industry standard. Therefore, a great place for that threshold alarm would be at 70% or 60% so that, when it hits that, you can get an alarm and know that something’s different; such as things spinning faster than they’re supposed to, or somebody’s added some equipment that you don’t know about, one of the other technicians maybe. This makes threshold alarms a huge benefit for data centers.

Again, there are three different types of PDUs. The cheapest one is Basic, then more expensive is Metered, and the most expensive is Switched.

The last thing I want to discuss is outlet configuration. On a basic PDU, typically, it has a standard Edison plug, the same kind of plug you would see in a wall. What you need to look for to ensure that vibration doesn’t allow for power supplies to come loose is an outlet type called a C13. C13’s the same 110 voltage as a standard Edison plug, but it seeds so that vibration doesn’t allow it to come out. An Edison plug, obviously, does not do that.

The other final type typically you’ll find on a PDU is a C19. C19 seeds the same as a C13, but instead of a 110 output, it has a 208 output. This allows you to plug in a large blade chassis or a large SAN that needs that 208 input voltage.

Those are the basic things you need to understand about PDUs. What type of PDU, Basic, Switched, Metered, and what type of power configuration and power cabling that you’re going to select when installing your equipment in the data center of your choice.